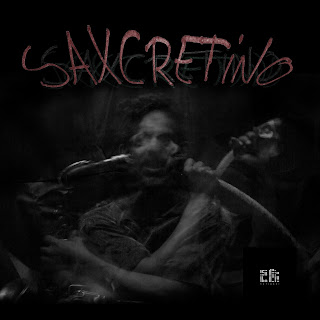 It is being released today - my first solo album - EP SAXCRETINO - soon available for download at Sê-lo! Netlabel's bandcamp


Saxcretino is a 1.2m-long hose with a saxophone mouthpiece at one end and the upper portion of a PET bottle in the other. Saxcretino is also my nickname, my way of playing the saxophone and the title of the EP.

The tracks are inspired by the human being of the present time – the way I feel, see and hear the world. More specifically, they are fragments of what I feel as a living being on tracks 2, 3 and 5 (1Ziriguid1, Comin 'Back in 5 and Samba de Vento) and what I see and hear on tracks 1 and 4 (Da Loja pro Lixo and sofa e TV).

Without commitment to technical perfection, aesthetic purity or specific sound, the 5 tracks express the combination of unconventional instruments and traditional instruments of Western music in a popular language with unusual rhythmic cells. The microtonal instruments used in the recording were made by me with material found in the trash and are inspired by the non-noble instruments de-composer Anton Walter Smetak.

With unorthodox production, the project had the saxophones (tenor, alto and soprano), voices, berimbau with paper mache gourd, microtonal wind instruments and percussion (cylindrol, saxcretinos, Caboclo flutes, boréu, spring drum), my heart and my breath recorded at home. I simultaneously assumed the functions of recording technician and musician, which was only possible with the support of recent technological advances in the music production field. Also, I prepared the loops of traditional Brazilian percussion, electronic drum beats and base instruments with samples and MIDI. I had the local participation of Fernando Machado playing guitar in "Samba de Vento" and intercontinental participation of Nancy Viegas on vocals in "1Ziriguid1. I used a Yamaha 25 alto sax and a Dukoff M6 mouthpiece changed with dental cement, a tenor sax Yamaha 275 with Otto Link Supertone Master n.8 mouthpiece and a soprano sax Pierret with a Bari n.6 mouthpiece. The sound of the heart was captured by a hybrid between stethoscope and condenser microphone designed for me to use in live performances with the internal sounds of the human body.

Saxcretino was created and conducted between April and May 2016, except "Coming back in 5" and "1Ziriguid1", which were initiated in May 2015. The songs were composed, arranged and produced by me. The mixing and mastering were done at the Hidden-Cam studios (Brighton & Hove - United Kingdom) with the help of Cameron Devlin (technical) during the first week of June and finalized on August 2, 2016.