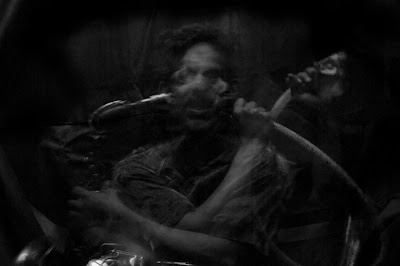 Saxophonist, microtonalist, performer and sound artist, I have been working in collaboration with theater, dance, circus, video and musical groups in Brazil and abroad since 2000.

I was one of the founding musicians of Banda Crac !, also being part of other bands from the alternative soteropolitano scene such as Trablinka, in the early 90s and Zambotrônic, in the early 2000s.

In addition to playing with renowned artists such as Luis Galvão (Novos Baianos) from 98 to 2004, I was also part of the

In Europe, following my passion for circus arts, I joined the German company Caesar Twins until 2007, besides participating in the musicals Bedelu (Germany), Ein Zummernartchsbaum (Germany), Home Fires (England), Cabaret La Clic (United Kingdom). I played with Irish singer Camille O'Sullivan and the British group King Lagoon's Flying Swordfish Dance Band, in addition to forming the groups Cozinha and Caiçara as well as conducting the musical direction of the Dança do Vento project.

I graduated with honors in Music & Visual Arts by the University of Brighton in 2011. Since then, I also dedicated myself to solo performances, exploring the inner sounds of the human body combined with Arduino programming. The video of my graduation performance has recently reached 53,000 views on YouTube.

In 2016, I released my first solo EP, SAXCRETINO, via brazilian netlabel Sê-Lo, available for purchase on Bandcamp and accessible on youtube as well. Later on, in 2018, I started a new album project in partnership with Guitarist Fernando Machado based on free improvisation over recordings of local urban soundscapes. released in 2020, BUILDING SITES is available in all digital platforms.