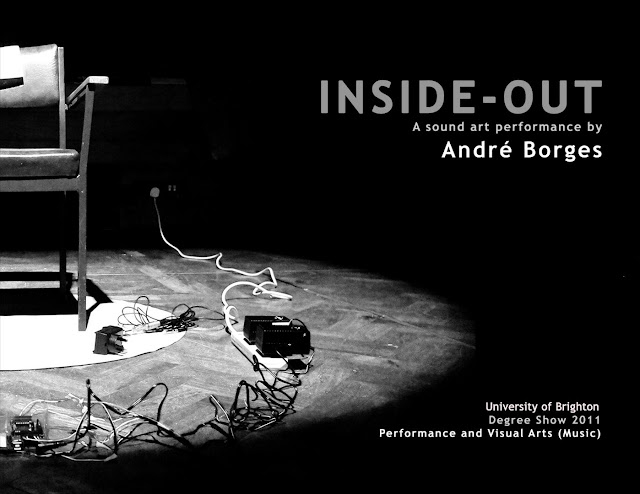 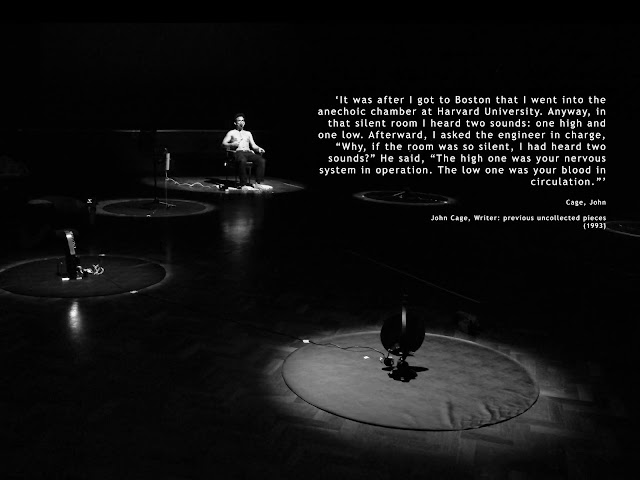 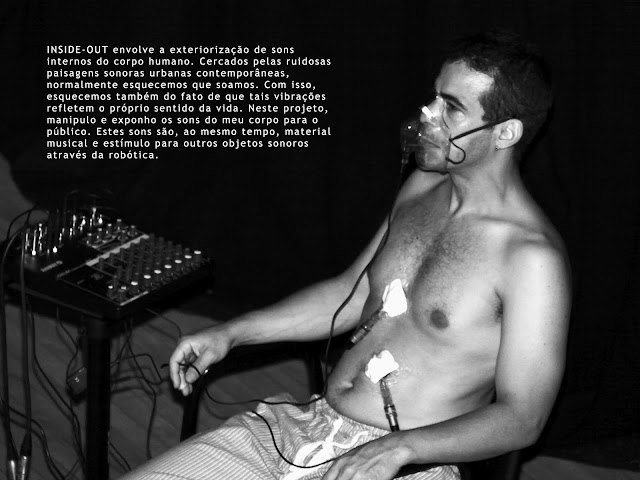 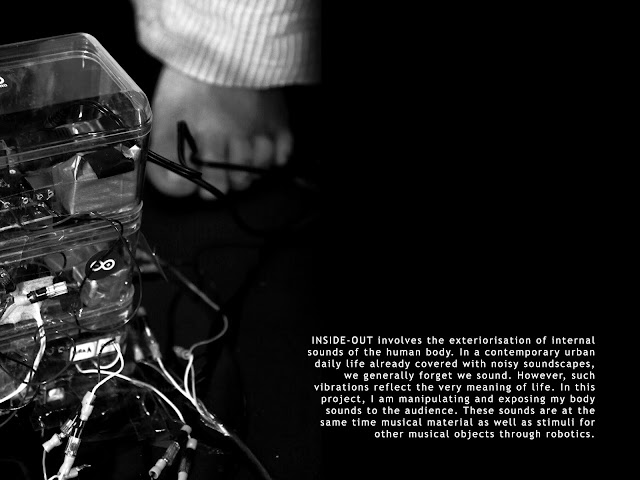 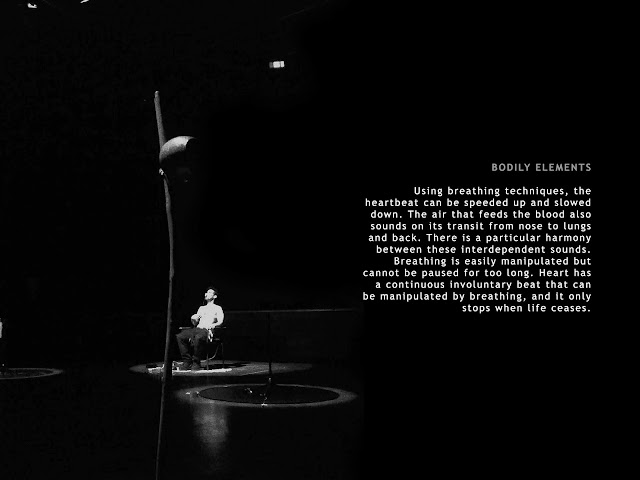 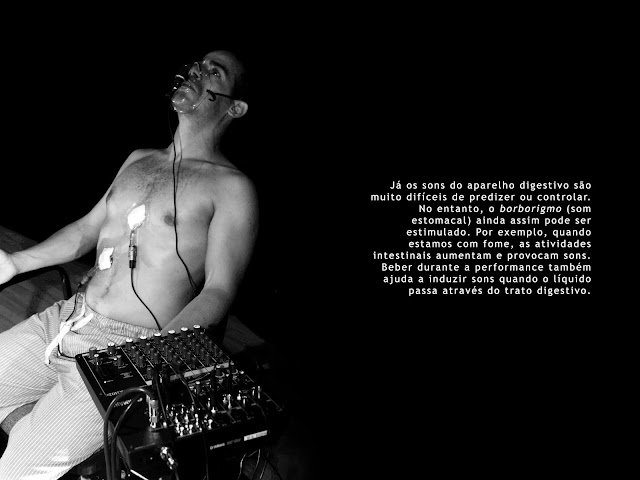 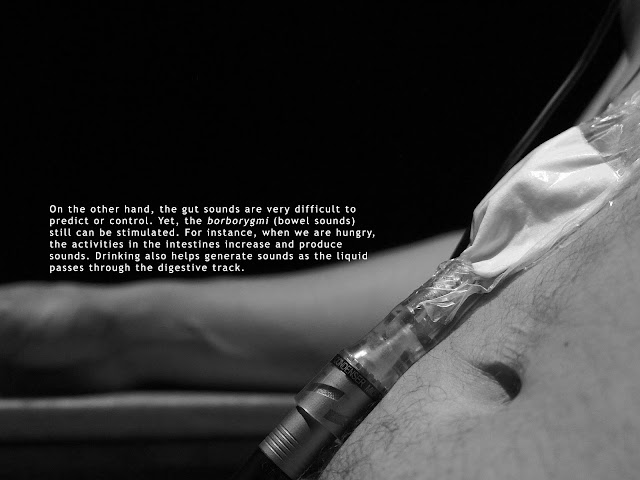 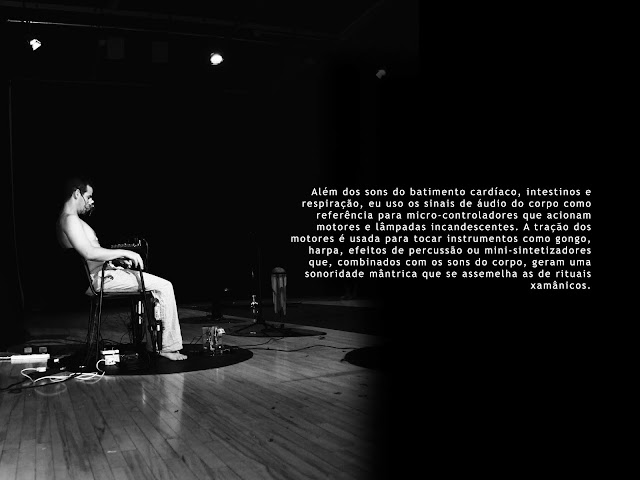 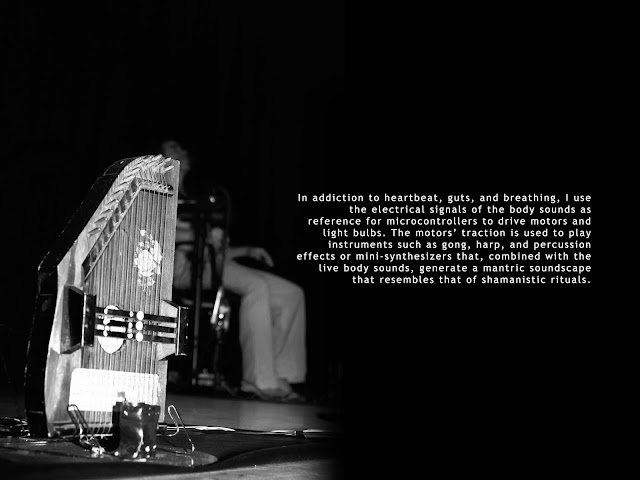 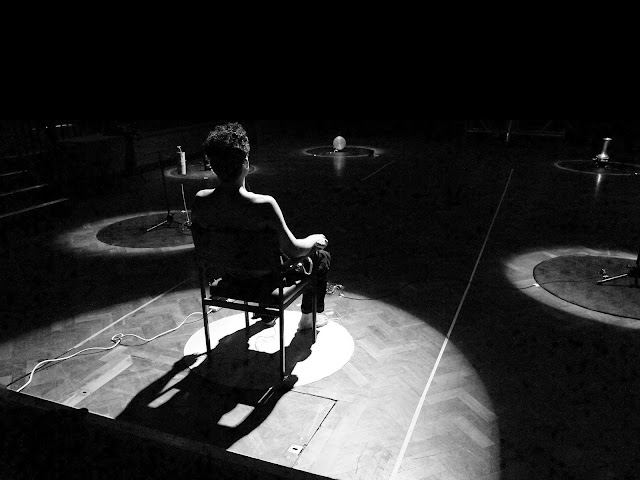 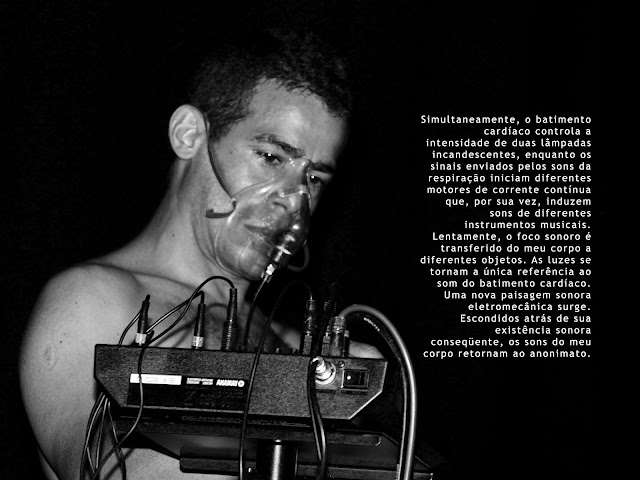 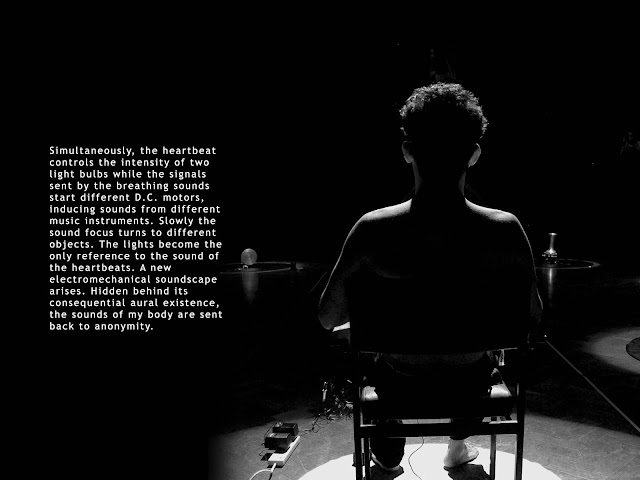 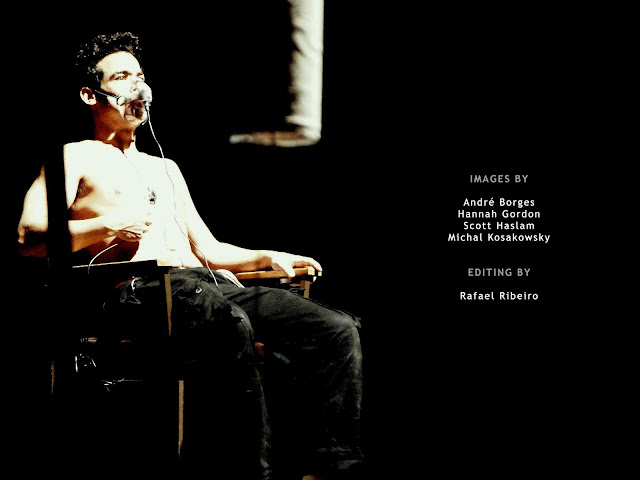 INSIDE- OUT: A Sound Art Performance

Firstly, INSIDE-OUT involves the exteriorization of internal sounds of the human body. Except by nurses and doctors, such sounds are rarely heard, analysed or explored. We generally forget we sound. However, such vibrations may reflect the very meaning of life. The internal rhythm of our body not just influences but is also influenced by our mind. The balance of these forces is directly influent in our daily heath.
Bringing body sounds to our ears may improve our familiarity with ourselves. The inside-out music involves the manipulation of internal body sounds. These sounds are, at the same time, musical material and stimuli for other musical objects.

Using breathing techniques, the heartbeat can be speeded up and slowed down. The air that feeds the blood also sounds on its transit from nose to lungs and back. There is a particular harmony between these interdependent sounds. Breathing is easily manipulated but cannot be paused for too long. Heart has a continuous involuntary beat but heartbeat still can be manipulated by breathing. However, it pauses mostly when life ceases.
The throat area, when operated in a very low stimulus can produce rich harmonics that cannot be done loudly – the internal singing. Extremely high-pitched sounds and chords are possible in such singing.

The guts sounds are very difficult to predict or control. Yet, the borborygmi still can be stimulated. For instance, when we are hungry, the activities in the intestines increases and causes sounds by squeezing fluids and gas down to the rectum.
The audio signal of body sounds is used as reference for microcontrollers to drive motors and light bulbs. The motors’ traction is used to play instruments such as gong, berimbau, harp, and percussion effects that, combined with the live body sounds, generate a mantric soundscape which resemble that of shamanistic rituals.
Exteriorisation/Technology 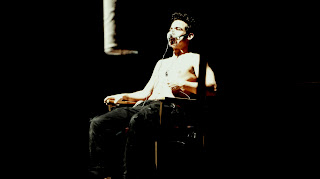 Trying and find a way to amplify body sounds, I have developed a hybrid between a stethoscope and a microphone. INSIDE-OUT has two ‘stethoscopic microphones’ - one attached to my hearth, and the second, to the guts.  Breathing sounds and throat singing are captured with a condenser microphone attached to an oxygen mask. The mask works as an acoustic room.

These three signals are transported to a sound desk and from there, to a PA system. Simultaneously, using Arduino technology, the signal sent buy the heart controls two light bulbs; while the signal sent by the breathing sounds starts different DC motors that induce sounds from musical instruments. The sound result creates a constant tension throughout the performance. On one side, my conscious mind trying and control the body sounds with breathing techniques. On the other side, the soundscape brought up by the very sounds, together with the side-effects of hyperventilation, reducing my consciousness.
INSIDE-OUT is influenced by the works of Murray Shafer, John Cage, Tom Rice and Evelyn Glennie. It is also inspired in Alvin Lucier’s Music for Solo Performer (1965). The ideas resulted from a year of research in the relations between sound and health and two years of part-time work at the Royal Alexandra Children’s Hospital as health-care cleaner, which also has provided me the means to afford the course in Performance and Visual Arts at the University of Brighton. 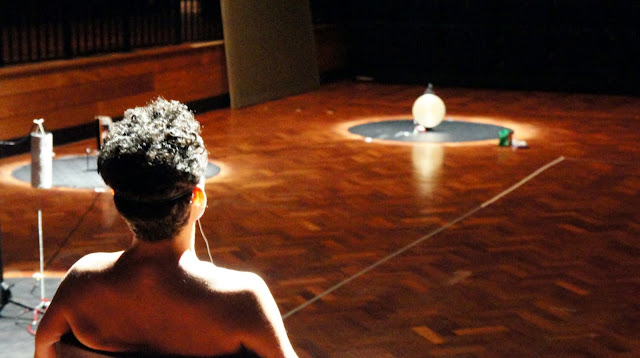 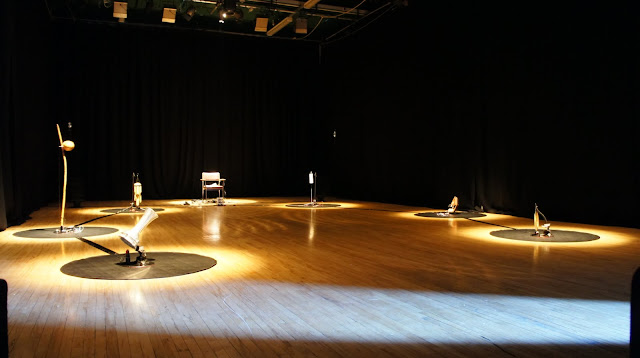 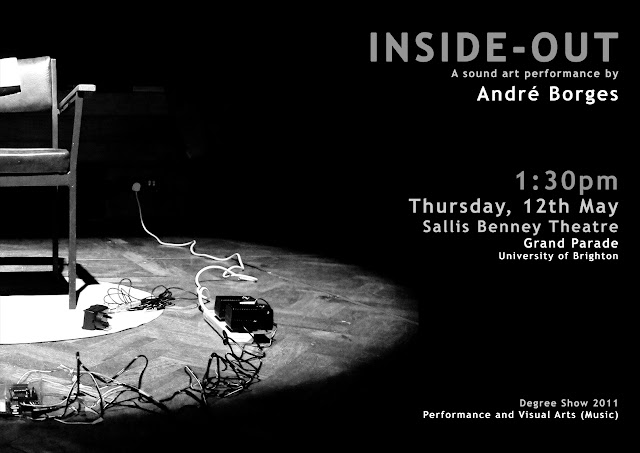 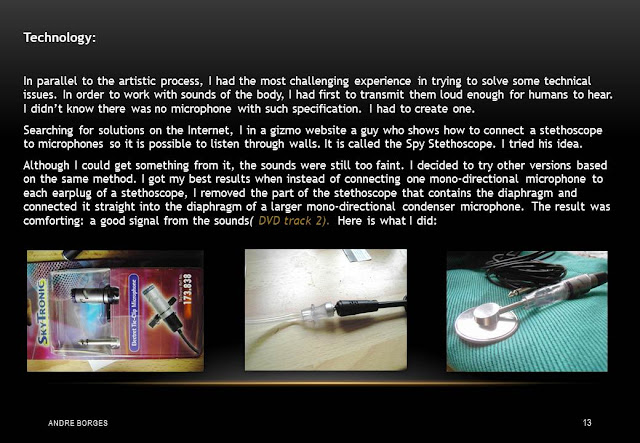 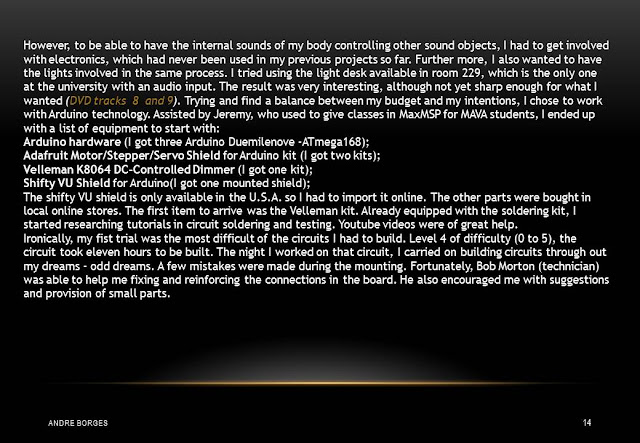 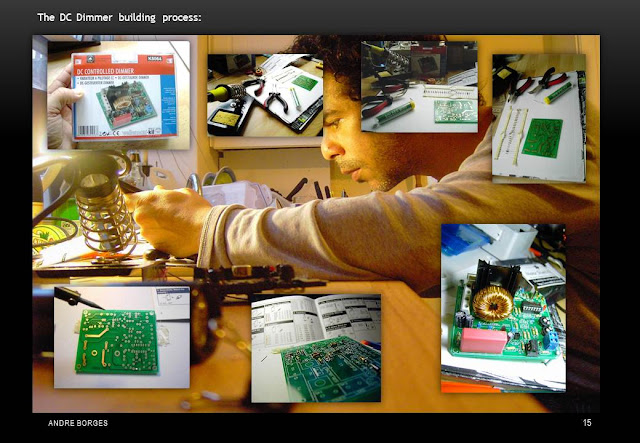 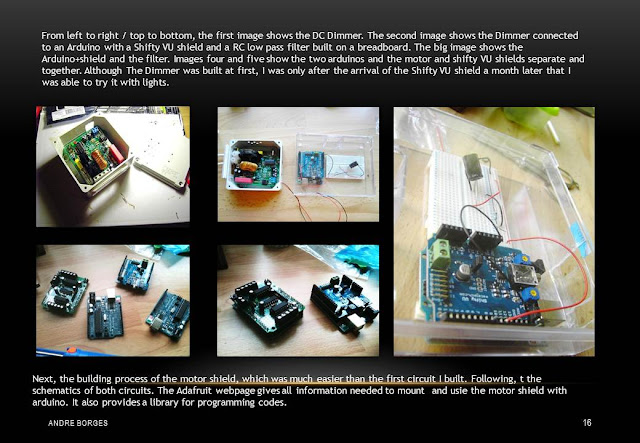 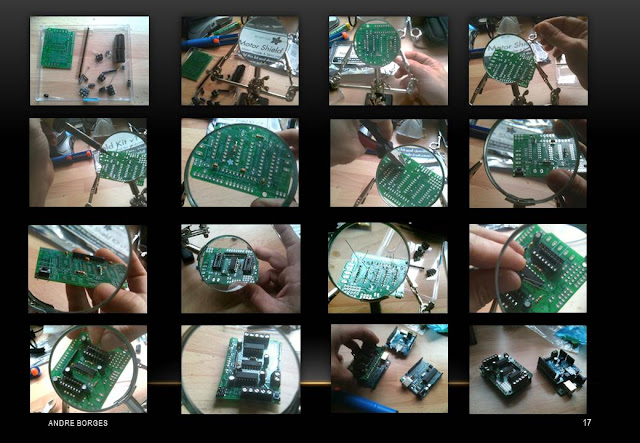 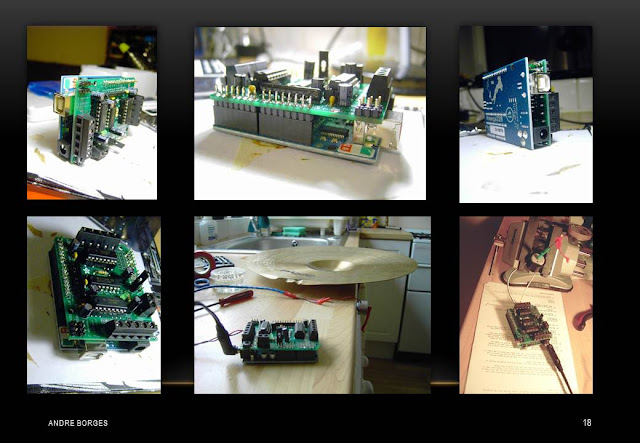 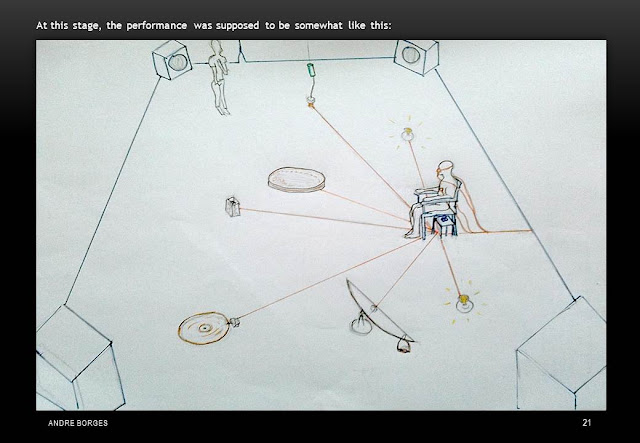 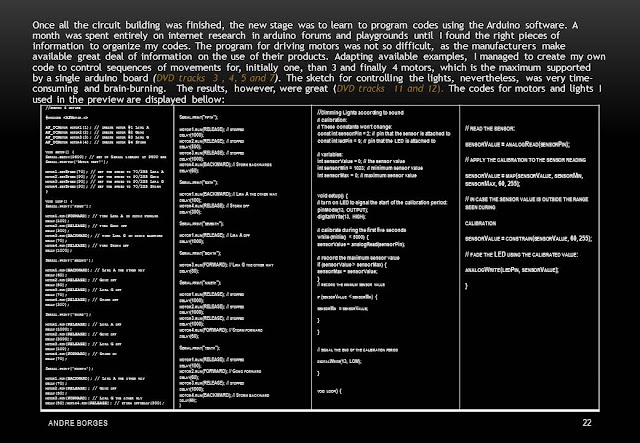