This work also goes against bad use of technology and the misbehavior of a society that is sunk in consumerism. The materials were chosen from disposable objects of daily use.
Influence of social pictures:
Picture 1 ‐ Our society struggling to make unprofitable decisions in our present moment for an uncertain future. The world is susceptible to changes that are not under control of our civilization. The civilization itself has never been under self‐control. The heads of political power are gathering in hope for comfortable solutions but not showing convictions. Meanwhile, lives are carried on day by day in our contemporary world were the real is not certain and ignorance is still a safe home.
Picture 2: Traces of information ‐ clear or manipulated – that are no longer fresh, are blown by the wind on old newspapers.
Picture 3: Christmas holiday memories and presents are kept for sometime before they are forgotten or replaced. However, Christmas waste lasts
longer. Glass and plastic bottles, wrap paper, plastic and
an enormous amount of food are all unconsciously
spoiled as if we could afford to keep our contemporary style of rich western life forever wasting so much.
Picture 4: Instead of having technology as a great
ally against our bad habits, we let consumerism transform
it into uncountable useless electronic gadgets and every
new color or shape is a reason for replacements year after
year. Moreover, it is never worth to fix a broken machine.
We simply buy a new one and get rid of the old one ‐
meaning just having it out of sight. Most of these things could probably last for an entire human lifetime.
Private Connections /Springboard:
Wind – breathing – voice – sound – communication – newspapers – recycling – technology – consumerism - waste. 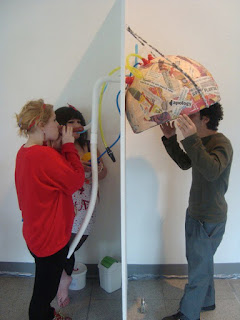 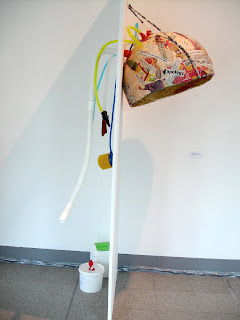 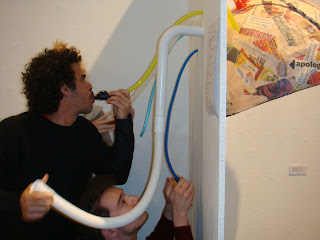 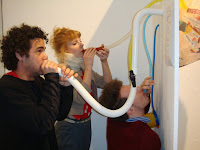 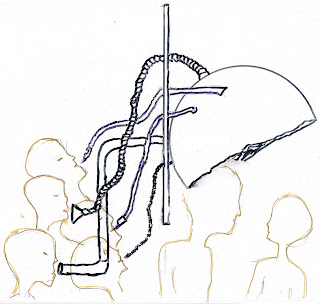 Inspired by the imagery seen through microscopes in microbiology, This work consists in a series of  slides accompanied by a soundtrack. I made the slides using ink, cotton, oil essences, plaster, alcohol gel, blood(mine), acrylic paint  and parts of insects. The soundtrack Is based on the soundscape of a Cardiac ward at the Royal Sussex County Hospital, in Brighton. It was recorded at home, using
beeps from laptop, desktop, microwave and timer, heartbeat samples, scissors, air pump, cooler, air-conditioner, PVC pipe 40mm, conduit, rubber balloon, alto saxophone mouthpiece+tube+bottle(saxcretino) and voice.
You can check all the slides and a link with a sample of the audio below: 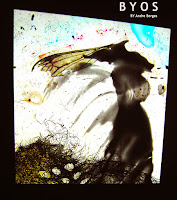 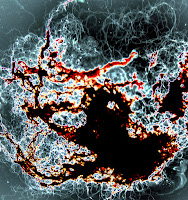 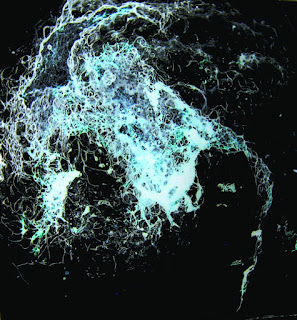 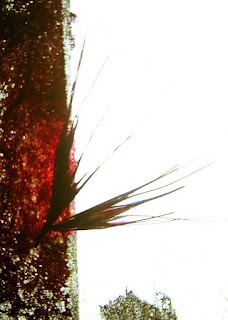 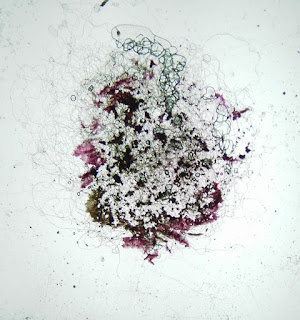 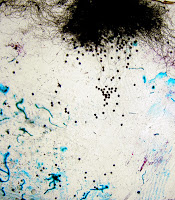 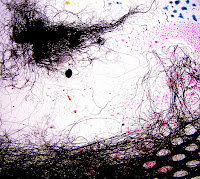 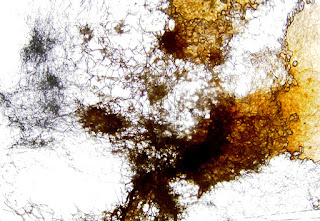 
Hearing Touch is a specific aesthetic situation for ears and touch. A semi-dark corridor in which the audience walks through, stepping and touching different materials and consequently producing and experiencing different sound textures.

The intention is to bring awareness of senses through stimulation. Specifically, Hearing Touch
Is related to the constant presence and influence of common sounds that have touch as their cause.

In contrast to the amplitude an influence of vision, a direct physical experience is becoming rare. Also the overproduction of sound - including noise - has taken people to a state of hearing numbness. In reaction to such situation, I have decided to build a space where eyes are tricked by close objects and lack of light while touch and hearing are stimulated by everyday objects. The Audience experiences the corridor as music performers, making their own music while passing through, or as listeners while waiting outside the space.

Newspaper, bubble wraps and supermarket plastic bags are the media used by the audience to build up their own sonic and tactile experiences. From outside, audience can hear each the sounds projected from inside and have their own thoughts, memories and projections of what is to come while someone else is playing the corridor.